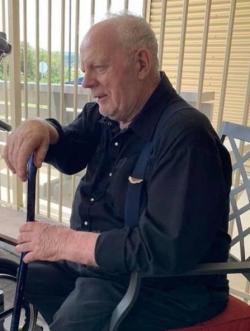 The death of G. Milford Armour of Hartley Settlement occurred on Friday, August 9, 2019 at the Carleton Manor, Woodstock after battling COPD, the after effects of strokes, and dementia for many years. Born December 22, 1942 in Maplehurst, NB, he was the son of the late Archie and Leona (DeMerchant) Armour. Milford was predeceased by his wife, Mary Ann (Haines) in 2011, several siblings, extended family and special friends.

He was known as Moe, Uncle Moe, Skip, and probably a few other names. He was one of at least 17 children born to Leona.

Milford loved having babies and children around, socializing with many who came to the house or his garage, charming the ladies (even the nurses and other staff at the Carleton Manor in the short time he was there), listening to country and gospel music (especially the Gaithers), watching John Wayne movies (“Big Jake! I haven’t seen that in years.”), fresh veggies, berries (especially raspberries), cake, whipped cream (“Dad, do you want some berries with that whipped cream?”), reading (Reader’s Digest, novels, and newspapers were favourites … “Don’t read all the words off the newspaper!”), Christmas, playing cards, and collecting coins. He was generous. If he had it and could give or loan it to you (food, vehicles, lodging, etc.), then he would.

He was proud of serving in the Army from approximately 1962 -1967, including a time being stationed at CFS Alert (500 miles south of the North Pole, as he would tell people). There was lots of snow there in July but he didn’t see Santa Claus while he was there. It was in the army that he learned that his official name was Golden Milford, not Milford Golden, resulting in him having to be discharged and then re-enlisted. He was proud of the medals he received for serving in CFS Alert and for Canada 150.

Milford and Mary Ann married on December 29, 1962. He moved his young family of 3 daughters to Toronto around 1969. He worked as a mechanic while there. George was born while the family lived in Toronto. Ronnie, Bev, Barb, and Becky all came to visit at various times. In 1974, he moved the family back to New Brunswick, where they built their house in Hartley Settlement around 1975. Greg was born and the family was complete. Milford worked for others for a few years before building his garage and opening Armour’s Auto Repair. Milford lived in their home until July 4, 2019 when he moved into the Carleton Manor.

Special thanks to Ellen, who was his primary caregiver since his first stroke in 2012.