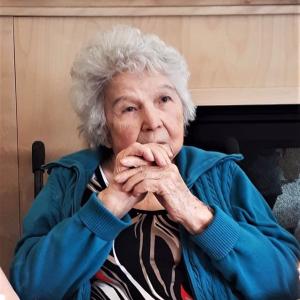 The death of Beatrice "Irene" Smith of Wicklow occurred on Saturday, August 10, 2019 at the Victoria Glen Manor, Perth Andover. Born March 5, 1925 in Hardwood Ridge, NB she was the daughter of the late Paul and Elizabeth (McNeill) Powers. Irene was also predeceased by her husband, Cloudie Smith; an infant son; grandson, Billy Smith; great grandson, Shane Sharpe and daughter in law Joyce Tompkins and several brothers and sisters.

Visitation will be held from L.R. Giberson Funeral Directors, 207 Burnham Rd. Florenceville-Bristol on Monday, August 12, 2019 from 6-8 pm. A Mass of Christian Burial will be celebrated on Tuesday, August 13, 2019 at 11:00 am from St. Leo's Catholic Church, Florenceville- Bristol. The interment will be in the adjoining church cemetery. Donations made to the Canadian Diabetes Association, Victoria Glenn Manor or to a charity of the donor's choice would be appreciated. www.gibersonfuneraldirectors.ca (506) 392-1115