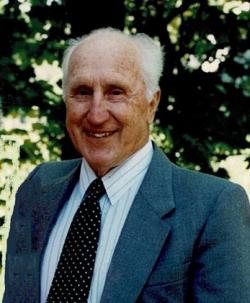 Hargrove, Bernard John - Age 95, of Bath, NB passed away peacefully at the River View Manor on December 22, 2019. Bernard was born on January 13, 1924 in Mineral, NB … a rural and close-knit farming community outside of Bath. He was the loving son of John and Fronie (MacDougall) and the last surviving sibling to brothers Russell, Basil, Bert, Vernon and sisters Flora, Mary, Avis and Mabel.
Bernard was a graduate of Bath High School in 1941, Teachers College in Fredericton in 1942 and the University of New Brunswick in 1946, where he completed his degree in Electrical Engineering. Bernard married the love of his life, Polly, in 1946 and they enjoyed 68 wonderful years of marriage until her death in 2015. Together, they lovingly brought 12 children into their family.
Bernard enjoyed a long and successful career as an Electrical Engineer. He worked in Montreal for two years for the Bell Telephone Company and then returned to Bath to start an electrical sales, service and contracting business with Polly by his side. Over the years, while Bernard was helping bring power to residents and businesses throughout the rural community, Polly was busy raising children and selling the first GE household appliances and snowmobiles to the area.
In 1960, Bernard and Polly began developing a private hydro-electric dam and generating station on the Monquart stream in Bath. They interconnected the generating station with NB Power in 1979 and Bernard continued to work on his labour of love until a short time before his passing. Rainy days were happy days for Bernard, while Polly loved the sunshine, so they almost always found a reason to be happy. They were pioneers in the renewable energy business in New Brunswick and persevered through many difficult and challenging times to sustain the business and their family. Bernard was a gifted engineer and, with Polly’s help, he was able to bring his vision to life.
Bernard very much enjoyed the outdoors - hunting and fishing and being surrounded by nature. He loved music and had a knack for playing many instruments by ear, including the fiddle, harmonica and guitar. He and Polly enjoyed hosting “sings” at their home with large crowds of family, friends and neighbours. Bernard was also somewhat famous among his family and friends for his long and detailed stories about his many interesting adventures, experiences and near-escapes. He was known by some as “Sparky” for his remarkable ability to solve any electrical problem.
Bernard and Polly’s children feel blessed to have grown up in a loving and supportive home. Our parents were kind, generous, welcoming and gracious. Thanks to Dad there was always a warm wood fire burning, and thanks to Mom there was always a delicious home-cooked meal.
Bernard is survived by daughter Jennifer Oakes of Fredericton, NB (Bill); son Basil Hargrove of Melbourne, Australia; son Garfield Hargrove of Bath, NB (Sandra); son Hilery Hargrove of Plaster Rock, NB; daughter Jaye Hargrove of Bath, NB; son Larry Hargrove of Toronto, ON (Anna); son Jeff Hargrove of Bath, NB (Rose Lee); son Darren Hargrove of Saint John, NB (Tamara); daughter Heidi Grant of Bath, NB (Dave); and daughter Jill Niedermayer of Halifax, NS (Richard). Bernard was predeceased by his infant daughter Cheryl Lynne in 1961 and eldest son Gregor in 2008.
Bernard will also be sadly missed and lovingly remembered by his 21 grandchildren: Jeremy and Ben Oakes; Josh and Jana Hargrove and Sommer Fox; Zakary and Levi Hargrove and Emily Nevers; Phoebe Tallman and Hannah Henter; Claire and Spencer Hargrove; Sam and Sarah Hargrove; Clay and Craig Hargrove and Shelby DeMerchant; Elias and Avery Grant; and Henry and Stella Niedermayer. Bernard also leaves behind 15 great-grandchildren and many nieces and nephews who he very fondly regarded.
Bernard’s funeral service will be held at L.R. Giberson Funeral Directors in Florenceville-Bristol on Sunday, December 29 at 3:00 pm. Visitation will be held on Saturday, December 28 from 6:00 to 8:00 pm and Sunday, December 29 from 1:00 to 2:30 pm. A private burial will take place at the Pine Tree Cemetery in Bath, NB. Donations in Bernard’s memory may be made to any charity of choice. www.gibersonfuneraldirectors.ca (506) 392-1115