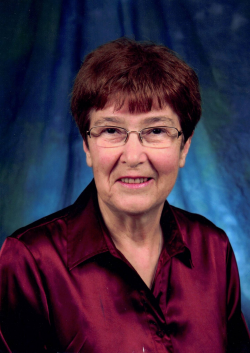 It is with great sadness the family of Maxine June Boucher of Florenceville announce her passing on Friday December 24, 2021 with her family by her side. June was born February 9, 1937 in East Glassville, NB and was the daughter of the late Ernest and Gladys Stone. She was predeceased by her loving and devoted husband Donald Boucher; her brother’s Allison, Richard and Lewis; sister in-law Grace Stone, Roseanne Stone and Ruth Boucher and brother in-law Darrold Boucher.

June grew up in Juniper and spent many joyful hours fishing and canoeing the Miramichi with her husband Don and her in-laws and lifelong friends Bobbie (Anita) Boucher, Lawrence (Ernestine) Sweet and Carl and Shirley Scott. In the fall, she would travel the back roads with Don enjoying the foliage and hunting partridge. June was a caregiver throughout her life helping her mother raise her younger siblings Richard, Lewis, Allison, Lynn and Meona and in her teen years she also looked after her grandmothers as their health failed.

Prior to her marriage in 1961, June also taught at the Bigger Ridge school – a small framed building educating children from one to grade twelve and pursued a year of nursing education at the Woodstock General Hospital School of Nursing. In her early 20’s she spent time in Vancouver BC helping her uncle run a grocery store.

Following the birth of her eldest, Brant, June dedicated the remainder of her years as a loving mother and grandmother ensuring there was homemade meals, desserts and a well run home. There was never a morning when breakfast was not waiting for everyone when they got up for the day. June also was a life long member in the United Church Of Canada’s Women’s Institute (Juniper and Florenceville); a Brownie leader during her daughter’s younger years; and enjoyed many years as a member of the choir with the Florenceville United Church. June was an avid reader, birdwatcher and known for keeping the family together across the country through letter writing. She was the keeper of the family story and history. The thread that bound the generations of cousins, aunts and uncles together with an open door and welcoming smile.

June also enjoyed many travels with Don throughout Canada, Europe, USA including an Alaskan cruise – a highlight of her travel experiences. But most of all June enjoyed her family and making sure birthdays had a homemade treat, a card was in the mail or a warm bed was made up to have company over.

The family would like to thank all those who helped in the care of June during the past four years. The family wishes to give a special thank you to Lorraine Stone for always being there for June and making sure she had all the care needs and taking her to visit family and friends. It was greatly appreciated by June’s children. As well, to the staff of Riverside Court Woodstock for their caring attention and the home visits by Dr. Marco when June felt unwell did not go unnoticed. A special mention to Gordon Hunter for always being available to June and her children meant a great deal. You all made a difference in a kind woman’s journey.

A Graveside Service will be held in the United Church Community Cemetery, Maple St. Florenceville on Saturday, June 25, 2022 at 10:00 am. Donations of remembrance may be made to the Heart and Stroke Foundation, the Miramichi Salmon Confederation, the DunRomin Stray and Rescue or the Faith Memorial United Church.

L.R. Giberson Funeral Directors are entrusted with the arrangements. www.gibersonfuneraldirctors.ca (506) 392-1115