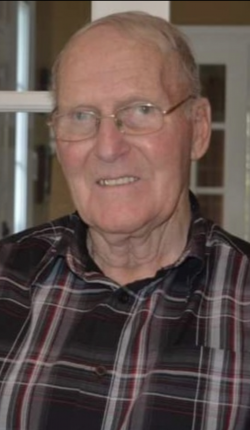 Leo Joseph Feeney passed away on Sunday, September 25, 2022 at his home in Bath. He was born May 9, 1932 and was the son of the late J. Donald and Sarah Feeney. Besides his parents, he was predeceased by his wife, Gertrude Feeney; siblings, Sister Joanna, Mildred, Ida, Pauline, Thomas, Reta, Maurice, Madeline, Eileen, and his twin brother, John; daughter-in-law, Brenda Feeney and grandson, Eric Globe.

The family would like to extend a special thank you to the Extra Mural Staff, his home care workers, Colette and Holly, special friends, Mary and Liz, and his neighbour, friend and doctor, Dr Bruce.

Visiting hours will be at L.R. Giberson Funeral Directors, 207 Burnham Road, Florenceville-Bristol on Tuesday, September 27th from 5 to 8 p.m. A funeral Mass will be held on Wednesday, September 28th at 10:00 a.m. from St Joseph's Catholic Church in Bath with Father Anthony Epke officiating. The interment will be in the Johnville Cemetery. If so desired, donations can be made to the Heart and Stoke Foundation. www.gibersonfuneraldirectors.ca. 506-392-1115
Service Date
Wednesday, September 28, 2022