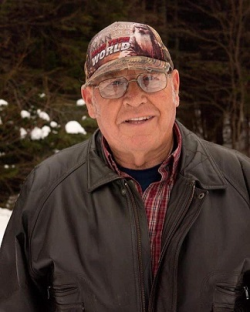 With deep sadness the family of Ronald Maurice Brown, Summerfield announce his passing November 22, 2022 at the River View Manor, Bath NB. Ronald was born at the homestead in Summerfield, the second child of the late Maurice and Emma (Smith) Brown.

Ronald, AKA “Farmer” “Dad” “Father” “Grampie” “Grandpa” “Daddy-son” BUT never Ron or Ronnie, lived a quiet life by today’s standards, a” low tech man in a high tech world”. Growing up, work was plentiful on the farm but there was always down time for play.

Ronald attended local rural school and then Centreville Regional High School, graduating in 1964. In the fall of 1964, he enlisted in the Canadian Navy and completed Basic Training. Ronald received an Honorable Discharge for compassionate reasons and returned to the farm.

Ronald travelled a whole three miles to court and married Betty White in 1965. Together, they instilled the value of hard work and the importance of family in their three children.

Ronald loved farming and he loved to travel. In the late 1960’s, he became a part time tractor-trailer driver. Eventually, this lead to Ronald owing his own trucking company along with the farm. After selling his own trucks and retiring from farming, he continued driving truck for other local companies until April 2021.

Each week he headed down the road for a new adventure. Keeping in touch with his family and trucking buddies Allan and Dave to help pass the time. Weekends were for home and family and Sunday morning coffee.

Ronald always said he was a plain man, no suits or ties, preferring T-shirts and work pants. He asked that anyone coming to say “Goodbye” come wearing their favorite T-shirt.

Ronald's family would like to thank the administration and staff of River View Manor for their kind and loving care of dad while he was there.

Visitation will be held from L.R. Giberson Funeral Directors, 207 Burnham Rd. Florenceville-Bristol on Sunday, November 27, 2022 from 12-2 pm. A funeral service will follow at 2:30 pm from the funeral chapel. A reception will be held following the service at the Masonic Hall, 200 Burnham Rd. The interment will be in the Summerfield Cemetery at a later date. In lieu of flowers, donations made to the River View Manor, Florenceville Legion Branch # 37 or the Summerfield Cemetery would be appreciated. www.gibersonfuneraldirectors.ca (506) 392-1115